← WHAT GOES AROUND, COMES AROUND!
THE SONG SHEET AND THE RAILROAD CAR →

THE STEAM PRESSURE GAUGE AS ART? 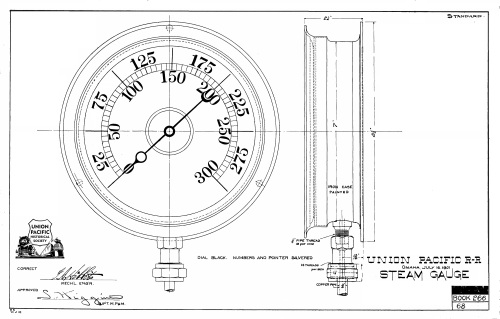 This drawing of a steam gauge may not be art to many observers, but it is certainly a well-rendered representation of a device vital to the safe and efficient operation of a railroad steam locomotive. I tend to be more concerned with the “safe” part of the prior sentence anytime I am within about a mile of a locomotive under steam. The history of steam locomotives has within it sufficient incidents to justify my heightened concern. The crew operating a steam locomotive has the same concerns and this amply motivates them to run their locomotive with safety in mind. They would be fools to act otherwise.

A railroad steam locomotive is operating at its most efficient level when the boiler pressure is maintained just below the pressure at which the safety valve will open. This leads to an interesting test of the skill of the crew. The Engineer controls the rate at which steam is used and the Fireman controls the rate at which steam is made. The actions of both Engineer and Fireman must be coordinated to keep the boiler pressure at the operating pressure – this is the test! Too much pressure and heat energy is wasted when the safety valve opens. Too little pressure and the locomotive “runs out of steam”. A really good crew can run with a clean stack and a feather at the “pop” valve. It takes real artists to achieve this. Perhaps this is the real art represented in the steam gauge drawing.

← WHAT GOES AROUND, COMES AROUND!
THE SONG SHEET AND THE RAILROAD CAR →