THE TITLE PUZZLES ME 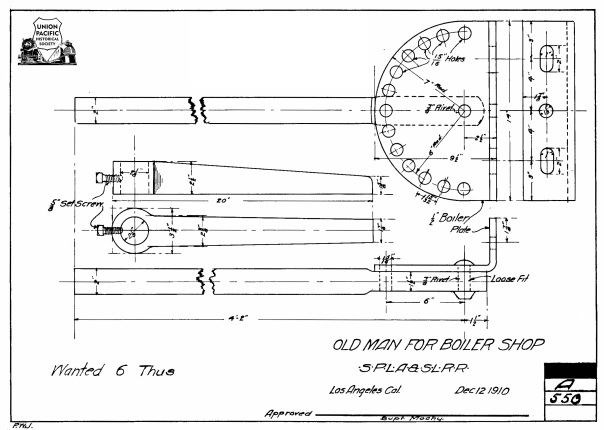 I’m personally familiar with the details of the contextual baggage that burdens the phrase “old man”. Been there and doing that now – so to speak. Recently I came across a drawing for a railroad tool that has the phrase “old man”  in the drawing title. This usage puzzles me because it is not clear to me what portion of the conceptual baggage is meant to be activated in the mind of the user . I suspect, however, it is meant to evoke a less-than-complementary response.

I started out by doing some research on railroad tools with “old man” in the title (I looked in a book I have on railroad shop practice). No luck there. So, I will do what good bloggers do and use my imagination to fill in the factual void.

An examination of the above drawing reveals the designer’s functional intent for this device is it serves as a lever to produce force multiplication (I do not remember the lever classes). The angle bracket on the right is meant to be firmly fixed to an object rigidly connected to the Earth, ie, an anchor. The actual lever part of this device is the 4′ 2″ length of the 2″ diameter bar, measured from the end on the left to the pivot point on the right. A situation where this device might be gainfully employed is one in which one part of a boiler being repaired needs to be forced into and held in a new position relative to a second part. The force needed is most likely well above the maximum force that can be applied directly by a workman. A force multiplier is called for. The following simple scenario will serve as an example. The workman selects an appropriate location and attaches the anchor bracket. He then connects the part to be moved and held to the lever bar at a point near the pivot end using a chain or cable. When all is ready, the workman applies a force to the lever at the end farthest from the pivot sufficient to move and hold the part in position. The magnitude of  the force being applied to the part is equal to the force being applied by the workman multiplied by the ratio of the distances between the respective force application points and the pivot point. This ratio will typically fall into the value range of two to four. That is, the force being applied to the part is two to four times larger than the force being applied by the workman. Clever.

Now for the “explanation” of the naming of the device. Men loose their capacity for applying force, their strength, as they get older. This fact has led to the general belief that “old men are weak and often need help” in doing this or that. Baggage! It is soon believed old men have the greater need for a force multiplier such as the one above. It would not take long in a shop setting for the request “Go get the force multiplier to help the old man” to morph into “Go get the old man”. Hence the name “old man”.