← THIS WAS “GREEN” THEN!!
UNION PACIFIC RAILROAD TRAIN NUMBER INDICATORS →

THE REASON THE WHEELS MUST EQUAL ANGULAR VELOCITIES 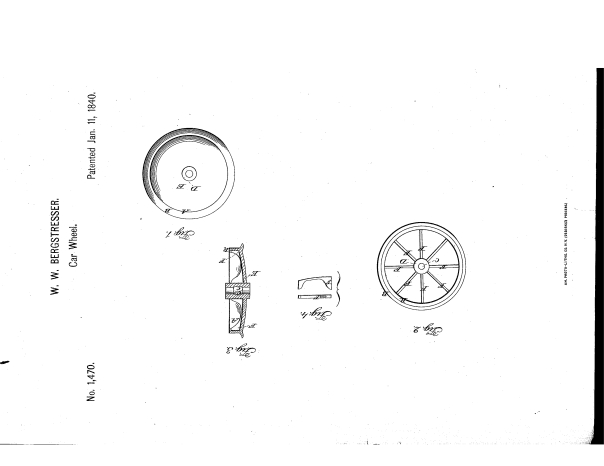 The importance of wheel tread design cannot be overstated for the following reason. The conical shape of the tread is what keeps the train on the track. As the wheels roll on the rails, the wheels and axles (the wheel set) will  find a position relative to the rails such that the average angular velocity of each wheel is identical; a requirement of the solid axle of the wheelset. As the train speed increases, the wheelset will begin to “hunt” for the right position by moving back and forth in the direction transverse to the track. The magnitude if the “hunting” increases as the train speed increases. At what is known as the “critical speed”, the transverse motion of the wheelset is such the flanges of the wheels ride up onto the railhead and the train derails. This is the start of a bad day for all concerned.

Even when the train is on curved track, the two wheels of the wheelset must have identical average angular velocities, if wheel sliding is to be avoided – a good thing. This is achieved by the wheelset moving in the transverse direction such that each wheel finds a position on the conical tread in which the effective diameters of the wheels compensate for the lessor distance traveled on the inner rail of the curved track and the greater distance on the outer rail. The conical shape of the tread is what keeps the train on the track.

Here is a link to an analysis of wheel tread design which has the details of modern design methods:

An examination of the 1895 tread will yield insight into the state-of-the-art at that time. As a comparison, I have included images of modern UPRR freight car wheelsets. These were obtained from the display provided at the recent UPRR family day picnic held at the ORANGE EMPIRE RAILWAY MUSEUM. The larger one is used on the center truck of articulated intermodal cars. They appear to be cast steel.

I am 89 years old and was married for 66 years. My wife passed away in 2016. I am a retired engineer and spent 35 years developing INS gyroscopes. I was a High School mentor in physics, a mountaineer, a model builder, a machinist and I have a degree in Physics. My interests include railroad history and photography, science history, cosmology, interesting people, and old engineering drawings. I place a high value on my friendships. I enjoying my life and I try look forward with a sense of anticipation and curiosity about what my future has in store for me.
View all posts by THE OLD MACHINIST »

← THIS WAS “GREEN” THEN!!
UNION PACIFIC RAILROAD TRAIN NUMBER INDICATORS →

Leave a Reply to THE OLD MACHINIST Cancel reply